since 1994, your no.1 source for electronic, industrial, ambient, dark, experimental & new music...
Next 5 Reviews »» 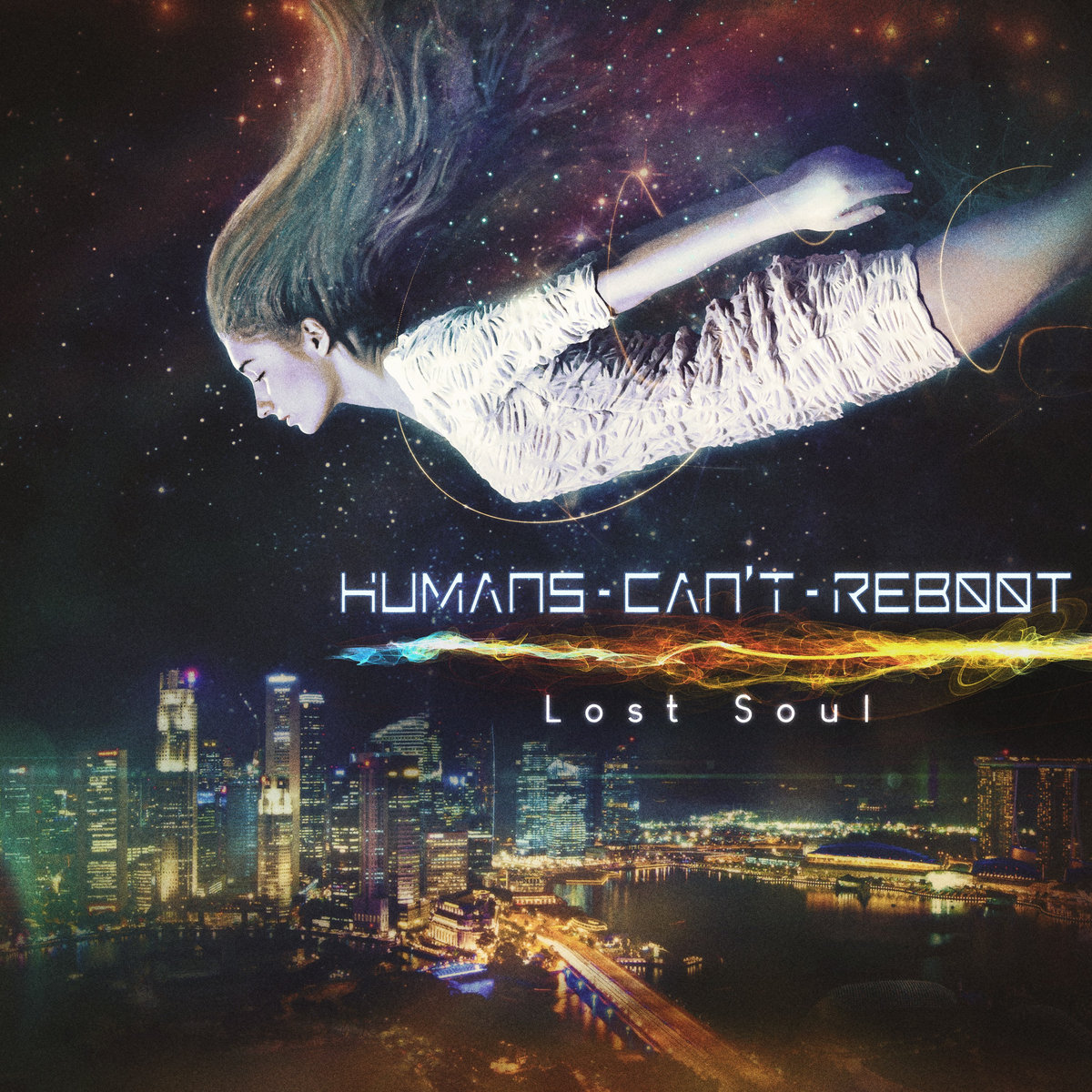 This is a new music project under the roof of the UK-based artist and DJ Simon Carter, who is known amongst others for his various collaborations fusing numerous electronic dance music genres or for his synthwave project SD-KRTR. Just check for example with his highly recognized discography brought to us by the Belgian Alfa Matrix label ("Studio-X vs. Simon Carter" series). He is an international renowned force for his modern dancefloor electronics which touch nearly all thinkable styles between Synth- and Futurepop, Trance, House, Techno up to the harder genres. Also his remixing abilities are widely recognized and often requested, just check the Alfa Matrix compilation series "Matrix:Reb00ted" on which he could already present his talent on different artists out of the label roster.
As for the vocal part of this new project he could hire with Amy Hannam a thoroughly capable lady and teamed up together they offer you their full range of "Unique, Stylish, Futuristic Synthpop", as their info sheet announces it. So the music of "Lost Soul" is kind of a fresh breathe in the above mentioned styles, not too much retro-infused though. Technically from the production and mixing it fulfills highest expectations and so criticism is rather to be included due to personal preferences.
As for the music I could ramble on some of the chosen bass line sounds and that they sound in my ears not originally enough ("Starlight" - is that a tuba doing this job?), while on the other hand I need to spend fair applause for the changes of float and mood between the tracks. The title track is a heart-touching piano-driven ballad and also Ms. Hannam provides here her best moments.
I enjoyed also the slightly New Wave-understones in a track like "Fading" through the descreet acoustic guitar sounds integrated. "Fallen Angel" is another track on which Simon slows down the tempo and adds musically depth with his dense piano insertions. But compared to "Lost Soul" this one is to me the weaker one out of both, too much I feel reminded on a parrot when it comes to check with Amy's repetitive vocal presentation on here.
I was also about to praise the original drum pattern programming of "iDO" (okay, I praise it...) but unfortunately on this one Amy offers her weakest part on this album. For whatever reason her vocals are sounding nasally and somehow she looses a bit track on the highs and the tempo - it misses intensity and emotionally dedication to me. A compareable characteristic can be noticed on "You Stand By Me" with its rather minimal produced synth arrangements and it shows the listener that Amy's timbre works at best when it got well balanced into richly placed pad and lead sounds.
Finally another true pearl on this album needs a mention too and this the album closer "Reality". I would never-ever reduce the success formula of this album on this very one tune, but hey, with its great piano drops, nicely installed synth harmonies and Amy's nearly perfect sounding timbre, you've got one track flying a bit under the radar asides the tracks which have been already previously released as downloadable singles like "Fading", "Fallen Angel" or the title track "Lost Soul" itself.
The full-length album "Lost Soul" offers indeed a wide array of multiple synthetic music styles and everyone should be able to figure out own favorites. Nice work show of the musically dimension of Mr. Simon Carter, flawlessly produced of course, but don't stop listening before you reach the final track.

As for further information taken out of the info sheet, Simon Carter likes his music to tell stories and two of the tracks on this album are based directly from his short stories of the same name ("iDO" and "Reboot"). You will find a copy of both of these stories as a part of the digital download in Ebook and PDF format. For more short sci-fi stories from Simon, please visit: https://www.smashwords.com/profile/view/sdacarter

A fair bit of workmanlike house music crosses my desk as a ChainDLK reviewer, but I try to only pick out the tracks that have a bit of edge, some USP, or let’s be frank, a bit of evil and darkness in them, and much of the rest can come and go.

However, I’ve singled out My Minimal despite the fact that on the surface it’s very straightforward, another bit of ‘weekday house’ with little apparent guts. But there’s something infectious about the bassline of the title track that really lands well. A nicely controlled bass and sub-bass combination coupled with the walking house beat puts it at the top of its class for quality even if it hasn’t got an experimental bone in its musical body.

Second track “Feel The Music” is more mainstream, and less infectious, with a generic female vocal that does sound like it’s been borrowed from somewhere like sounds.com in lieu of any original ideas. But again it’s well put together, and there’s a curious but short lived choral pad sound that just hints at a bit of darkness underneath.

It’s slightly sizzled, lightly grilled, crispy house music that won’t raise any eyebrows but which has to be praised for being well cooked.

This nearly unpublished and lost Mini-Album was conceived during the mid to late 90's and only recently rediscovered. Now remastered and redesigned Lontano Da Dove? could be easily a current release - asking existential questions of the Where from? to the Where to now?
The Torino based Italian collective DsorDNE in this incarnation were Marco Milanesio together with Luciano Gelormino, an early associate and Maisie's singer Cinzia La Fauci.
Musically the four pieces are surprisingly accessible with solid basslines, trip hop influenced beats and most of all the ethereal hushed female vocals from Cinzia. There is even a rare vocal appearance by Marco on 'Zerouno'. Too soon 'Zeroedue' continues upbeat and expands the dreamy side while 'Zerotres' moves on hinting at the more ambient direction Marco soon would take. A well balanced melancholy continues and shimmers through in the last track 'Piano Zeroquatro'. The more experimental sides of DsorDNE's past do show only in small details - an abrupt ending in 'Zerodue', the ultra clear accent when the beat starts in 'Zerouno', a tape ending sound as finale.
Lontano Da Dove? is a bittersweet romance - promising and exciting but also vague and misty.
This was actually DsorDne's final release for close to 20 years - Marco went on to built himself a career with O.F.F. Studio, engineered, remixed, guested, scored videos and produced many interesting projects besides appearing solo and disguised as 9cento9. Since 2017 interest in DsorDNE led to various more than interesting releases and some re-releases from facsimile reproductions up to this LP with completely new artwork.
The cover, designed by the Swiss graphic agency Enea Bortone choosen tastefully by the Label adds another accent of timeless pop appeal meets abstraction.

The reliable 3Bridge Records have offered up another 4-track EP from the mellower, more progressive side of house- and this one is gentle and laidback even by their standards, with New York-based Sleepy & Boo offering up a nostalgic sound of afternoon beach house.

Perception is quite loungey thanks mostly to its key sounds. “Expectation” starts off with thicker kicks and more of a sense of purpose, but before too long gets to a breakdown full of long Balearic vocal pads and a soft wistful two-note melody- but it’s a well crafted blend and a highlight once the beat comes back.

“Impressions” is nicely bright and optimistic and “Notion” has a flatter, more journeying tone, but essentially they’re all built from the same recipe of crisp house beat, layered pads and plinky synth arpeggios, and a structure that makes the chord sequence the star, in the absence of any vocal or other top line that would normally take that accolade.

For circumstances where house music being forgettable isn’t a problem- gentle afternoons, office work or slower workouts, dare I say it even ‘muzak’- this package has got all the quality in the right places, without anything to make it stand out.

German techo producer Housemeister’s second album of 2020 alone (bored in lockdown much?) is a fairly short mini-album of upbeat progressive house with a generally positive vibe befitting of the “Endless Summer” (sorry, “3ndl3ss Svmmer”) title, and easing off some of the cheekiness and playfulness of previous releases.

It’s generally fast, often squelchy, with a endearing lean to the analogue, most succinctly represented by tracks like arpeggio-lead “Trip To Heaven”. Some tracks feel more like a 90’s throwback than others, and there’s a lovely electro vibe in “Feel Like” that can’t go unmentioned.

It’s instrumental, with minor exceptions- a few single-word snippets, like “concentrate!” in the slightly tougher-edged “See You!”, but mainly when the unmistakable voice of Miss Kittin adorns “Daydreamer”. It’s a dreamy and mature spoken-word, almost whispered lyric with intelligence and introspection.

Coming out on the All You Can Beat label that Housemeister co-founded, this all feels like home turf, nothing particularly outrageous or experimental, but nevertheless a really nice pack of high-energy positive techno.